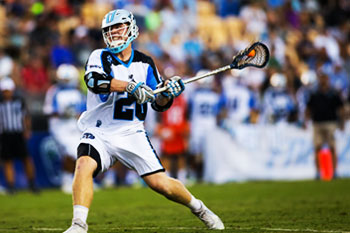 Ryan ChenaultPresidentOhio MachineGet to know Ryan ChenaultIf he could have dinner with anyone living or not, it would be:George Washington: A truly amazing man and leader.He would take George Washington to:A beach in Mexico for some fish tacos.If he could live in a book, TV, show or movie, it would be:Cat's Cradle by Kurt Vonnegut.His childhood dream job was:An automotive engineer designing racecars.Chicago's Big Ten TeamThroughout his career, Ryan Chenault has found success by following his passion. His internal drive, along with the support of his parents from a young age allowed him to pursue his dream: a career in the competitive industry of sports.“Working in sports is not always hard work, but you have to work hard at it,” Chenault said. “If you don’t love it, it’s not going to be easy.”As the Assistant Athletic Director for Marketing in the athletic department at Northwestern University, Chenault played a large role in making lasting changes at the school. In 2009, Northwestern hired Jim Phillips as Athletic Director and Morton Schapiro as University President.“The two of them determined that, because Northwestern is a world-class university, it should be world-class in everything it does,” Chenault said. “That not only includes academics and research, but also athletics.”Chenault said their decision led to funds and resources unlike any the athletic department had ever experienced.“That allowed us to act more like a professional sports organization in Chicago, which is a professional sports town,” Chenault said.With supportive leadership and ample resources, Chenault and his team came up with what turned out to be a program-changing idea. They called their marketing campaign, “Chicago’s Big Ten Team,” and it is still running today. The idea was to combine the loyal fan bases of two very large markets and give them a collective identity.“Chicago is a great sports town where people are very passionate about their city and their sports,” Chenault said. “It is also the epicenter of the Big Ten, which is one of the premiere brands in college athletics.”There are more alumni from Big Ten schools in Chicago, than in any other city in the country.“If you’re a Michigan or Ohio State fan living in Chicago, you probably aren’t going to Ann Arbor or Columbus all the time,” Chenault said. “But if you want to come get your Big Ten fix, Northwestern is just a few miles away.”Having no other major college sports alternatives close by, they were able to funnel Chicago sports fans without a previous college affiliation and fans of other Big Ten schools onto Northwestern’s campus.“We were completely fine with being someone’s second favorite team,” he said. “We may not flip you to be a Wildcat fan, but most likely, unless we’re playing your team, you’ll be rooting for Northwestern.”In building the brand, Chenault also took a page out of Julius Caesar’s book, who knew the power of influencing the rising generation. When the Roman empire took over a city in a different country, they would make sure all the schools were teaching the children in Latin and about Roman history.“More than likely, you’re bringing your kids to games, who will grow up experiencing Northwestern sports and become Wildcat fans,” Chenault said.The “Chicago’s Big Ten Team” campaign, aided by the success of the football team at the time, produced records in revenue, doubling the season ticket sales for Northwestern athletics.The Ohio MachineHis success at Northwestern propelled him to his current role as President of the Ohio Machine, and back to his hometown of Columbus, Ohio. An alumnus of The Ohio State University, Chenault joined the Major League Lacrosse franchise in July 2016 with very little lacrosse experience.“Coming into this opportunity, lacrosse was foreign to me,” he said. “The business end, however, is the same no matter what sport you’re working with. The goal is to position the brand, raise awareness, generate revenue and create partnerships and connections with the community.”With his hire, the Machine ownership followed a growing trend in the league to bring in people that do not necessarily have a lacrosse background, but have experience building a brand or running a sports business. Major League Lacrosse has only been around since 2001, and Chenault is excited about its future.“The league has weathered the storm,” he said. “But it hasn’t reached its full potential. My job is to build off what has been done and help take it to the next level.”Chenault joins a front office of only 10 people, but to him, that’s what makes this such a great chance to grow.“We have the ability to be more nimble than the larger teams in the area,” he said. “We get to build a brand from the ground up with great support from ownership and from the league. You don’t get opportunities like this very often.”Knowing full well he had a tough task ahead of him, Chenault set the goal to be the very best sports organization in Major League Lacrosse and in the entire Ohio market.“That’s a lofty goal, I realize that,” he said. “The way we are going to achieve it is by delivering a world-class experience in everything we do and focus on the things we can control.”Chenault knows there are certain things that are out of reach, such as winning sponsorships based on impressions. As a point of reference, the Machine’s stadium holds 6,500 people and Ohio State’s football stadium holds 110,000; but that doesn’t discourage the President of the Machine.“We don’t have everything some other teams do, but there are things we can deliver that differentiate us, including the access to players and the fan-centered experience,” Chenault said. “Those are the things that we can control, and we will.”Looking ahead to the long days and heavy lifting of building the Machine franchise, Chenault is very optimistic about the journey ahead.“We might not see results right away, but we have to trust the process and keep grinding,” he said. “When we finally reach our goal, we’ll know that all those days of hard work leading up to it is what got us there.”