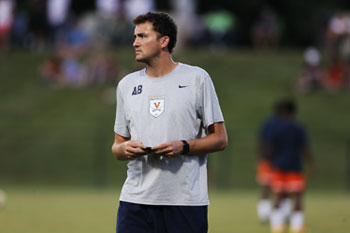 A.J. BarnoldPerformance AnalystMen's SoccerUniversity of VirginiaGet to know A.J.If you could you have dinner with anyone living or not, who would it be?Ronaldinho. He was the best player in the world multiple years in a row and then, out of nowhere, dropped off the map completely. Where would you take him?I’d let him take me somewhere in Brazil. I’ve never been there, and I’m sure he’s got some good spots there.If you could live in a book, TV show or movie, which would it be?I’d live in a sitcom in New York City, particularly Friends or How I Met Your Mother.What is your favorite thing to do around Charlottesville?I love going to the Downtown Mall, which is one of the largest pedestrian malls in the U.S.What was your childhood dream job?For a while growing up it was a sports medicine doctor. I also refereed when I was young, and imagined myself becoming a big-time pro referee.What are your personal core values?PerseveranceOne big one for me is perseverance, which I interpret as the ability to put your head down and fight your way through anything that’s in your way. Along with that, I believe that in order to achieve goals, you have to be willing to work hard. It sounds cliché, but I’ve found it to be helpful. Driven by PassionAnother of my core values is centered around passion. I have always been determined to pursue a career doing something I love, no matter what it is. Fortunately to this point, I’ve been able to do that. I love working with the college age group, because I’m able to have an impact on young athletes at a really crucial part of their lives.Who has had the biggest influence in your life?The first is my mom, who has had a big influence on me throughout my life, and then my college soccer coach. They both saw in me that I would be a good coach and teacher before I ever did. I didn’t set out to become a coach. It was at their urging and suggestion that I decided to try it, and I discovered that I have a passion for it. My college coach helped my progression down that path by teaching me what the coaching world was like while I was still in college. He connected me with other people in the profession and helped me get a foot in the door.What is the best piece of advice you’ve ever received?At one time in my college career, we had a bad game as a team, and I was in the middle of a particularly poor stretch of games, personally. I’ve always been one of my harshest critics, and I was in a bad spot psychologically. I opened my locker one day and on the inside of the door was a sticky note that said, “Our greatest glory is not in never falling, but in rising every time we fall.” I saw that, and it gave me the courage or motivation to keep going. It was not a huge deal at the time, but I find myself thinking back on it when I’m in that kind of situation.What was it like for you to come into a program that was fresh off a National Championship?A major portion of my role in the program has to do with performance analysis; video, scouting opponents and statistical analysis. The challenge for me was to bring a new perspective to that role, without overstepping any boundaries. I knew I wasn’t going to walk into the office of the National Champions and change what they were doing. I tried to find the right times to make my mark. I have definitely grown as a coach in my newer role as an analyst, and I think I’ve been successful in contributing my own unique ideas to our program.