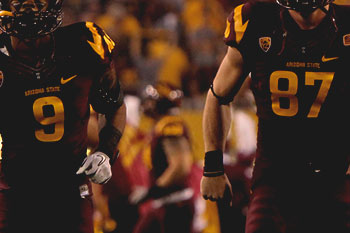 Luke PowellCoordinator of Special ProjectsArizona StateTim CassidySenior Associate Athletic Director of FootballArizona StateWhy did you decide to implement Teamworks for your program?Number one, I got to visit with the Teamworks staff, and they are all very professional people that know, as former players and former athletic administrators, what we go through in day-to-day operations. These are people that are familiar with what’s going on in college athletics.Number 2, I’ve had some time to follow some of the other teams that I have a lot of respect for that are using Teamworks, and in communication with them, I’ve found people who are really satisfied with the service Teamworks is providing.It has been a great tool for us. I really appreciate Teamworks giving us the degree of time they did to use Teamworks as a trial and get to know us. Our biggest challenge will be making sure we use this to it’s fullest extent, and that’s where I count on my staff to get the most out of it and use it for everything it has to offer.The immediate area of need for us was the Messaging component, which helped us get information out to players and staff almost instantly. Once we learned more about what Teamworks could do, we were able to see that having all the information that Coach Graham wanted us to have stored on the players in one place makes a huge difference.What problems does Teamworks address that weren’t being solved?We are now able to reach out to players so much easier. We can get more information out quickly. From a communications standpoint, with these kids, the ability to communicate with them and set up all the reminders they need is probably the greatest asset. Honestly, we’ve probably just scratched the surface of what we can do with Teamworks, but just texting and being able to set up calendar appointments and reminders, not only team appointments but outside events as well, has been a big help.Coach Graham wanted the Assistant Coaches to be aware of where their players were at all times- where they live, who their roommates are, when they’re in class. Now that we’ve rolled Teamworks out to the coaches, they have all that information whenever they need it. If Coach Graham asks them a question about a certain player, they have a place where they can look it up immediately.We’ve had several times where we needed to change practice time and it was easy to just go to the Calendar and use “check availability” to run a quick report and see class conflicts.How have the staff and athletes responded?As we’ve started rolling it out to coaches, they’ve been really excited about being able to go to one place to get all the information they need on their players. They’re just in the early stages of learning all the ways they can use it, but they see how useful it is and how much it will help when we get into the season.We’ve had great usage from the Athletic Trainers. They’ve been setting up appointments, and it’s been really helpful for them to be able to see player calendars and check their schedules.The Academics staff have been strong users. They’ve been sending out messages about deadlines and other academic-related info. For them, the ease of being able to pull up the player calendars on their phone and have access to the players’ info 24/7, as opposed to before where they’d have all the schedules in a binder in their office, has made things a lot easier. In the past, if something came up while they were out of the office, they’d have to go through a lot of inconvenience to find easy answers.The athletes, initially, we had to coach up a little bit. They tried saying, “I didn’t get that message,” and things like that at first, and we showed them that we can see whether or not they’re getting each message. One of the things we had to do is let them know if we’re sending something through this it’s obviously important, and now they know that these timely messages are important and they’ve bought into it.I think they’re more attentive to the info we’re getting to them. I think they’re more accountable just because we’re communicating with them better.There’s been no negative feedback from any of our administrative team. All very positive.How would you rate Teamworks’ implementation, training, and customer service?Very good. We’re still looking for ways to get even better. It’s got such a broad range of things we can use and we want to keep rolling out to more people and getting even more out of it.Teamworks has had good presentation, good follow-up, and we’re building a long-term relationship.Would you recommend Teamworks to other programs?No question I’d recommend it, and I already have. It’s a great tool for communication, and you’re missing the boat if you’re not a part of this association.Any staff will find Teamworks useful. This gives you the ability to maintain a lot of information on every player and every staff member, access it around the clock, and message a large number of individuals within a minute.It’s really simple to use. Teamworks provides training, but it’s already really easy to use, so a lot of us have been able to go on and quickly figure out ways we can personally use it.I would tell anyone who asked me that this is a great product, well worth the money. You’re going to save yourself a lot of time and a lot of headache.Football coaches are often reluctant to try new things, but once you start using it, you’ll see the benefits of it.