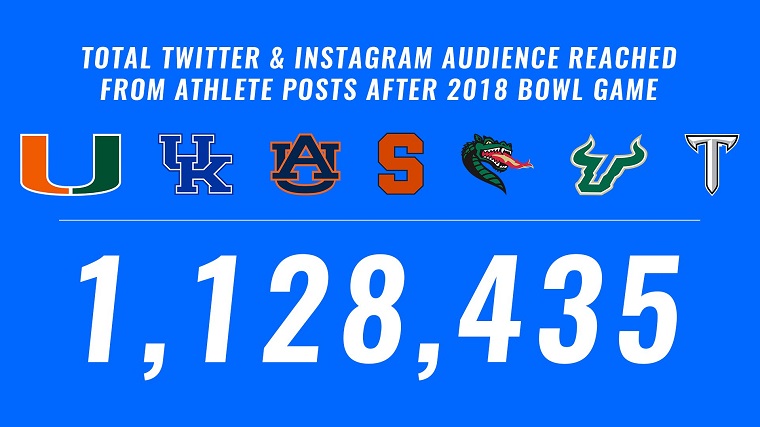 The football season may have been over, but these storytellers weren’t done. Seven INFLCR clients finished their 2018 season at a bowl game, five ending on a high with a win, and two sharing their thanks for the season and outlook towards the next season after a loss.

Win with humility or lose with pride, seven schools made their presence known and over 1M people saw it happen through the eyes of participating athletes on social media.

Three of the seven teams are in non-power 5 conferences, but that didn’t stop them from making noise.

UAB, USF, and Troy had an audience reach from athlete posts on Instagram and Twitter of 274,784. That’s more than the total number of followers for all three schools’ official team accounts on both platforms combined. Not only did their audience reach extend beyond 250k, their staff uploaded 2.3x more content than the four power-5 teams, which led to 1.5x more downloads and shares from the athletes.

On the other hand, Kentucky, Miami, Auburn, and Syracuse made up the four power-5 teams. INFLCR-powered athlete posts from these four teams reached an audience of 853,648 after their bowl games.

The standout amongst them, Auburn. An audience reach of over 850k for four teams is impressive from one game, but almost half of that reach came from Auburn alone with 96 athletes active on the INFLCR app after the 63-14 win over Purdue.

The Tigers’ social media usage after their win paid off, but what about the schools that lost their final game of the 2018 season?

For Miami and USF, their season didn’t end with a W, but their athletes still took advantage of the bowl spotlight on social media. Miami had the second-highest audience reach on IG and Twitter out of the seven clients even after their loss. USF had 88 and Miami had 90 athletes active on the INFLCR app afterwards.

Regardless of outcome, bowl games are often the last time seniors will pad up for their school or football career, and it’s a time for storytellers to thank their fans for following and share their excitement for next season. So often in sports we see that one season ending on a low can translate into major motivation for the next one to end on a high.

As another college football season comes to a close, we’re looking forward to the set of 2019 bowl games in just a few weeks. Nineteen INFLCR clients are bowl eligible this year. Among them is Charlotte, which is eligible for the first time in program history. Six of those clients are in the AP Top 25.

Let’s take a look at Auburn again, especially after their 45-43 win over in-state rival Alabama last Saturday in the 2019 Iron Bowl, which awarded them INFLCR’s Week 15 Client of the Week. Their student athletes’ 2018 average audience reached on Instagram was 105,634 during the season. The Tigers bowl game social media aftermath had a reach that was 3.4x higher than their season’s average.

The 2019 average audience reach for their athletes on Instagram so far for this season was a little higher at 115,070 (excludes audience reached after win over Alabama).

Roughly 10k more people on average are a part of the 2019 Auburn football audience that otherwise may not have been reached, partially because their athletes had such massive reach after their 2018 Music City Bowl win.

Looking forward to their bowl game, Auburn is armed with a higher average audience on social media because of their athletes. They can now take advantage of their athletes growing following and use it to spike their audience reach again after their 2019 bowl game.

One way to capitalize on that last game of the season is for athletes to post after the game is over. However, more eyes will be watching if athletes gear up for the game by sharing content before they step on the field. Former Auburn QB, and current New England Patriot, Jarrett Stidham did just that last year during bowling season.

He shared exclusive content on Instagram from the Tigers pre-bowl practice, and more than 23k people liked it. Jarrett then posted his thanks on Instagram to the Auburn family and followers after the game had concluded, this time engaging more than 29k people. By posting before the game, he captured the eyes of many who went on to watch him throw for a career high 373 yards and five touchdowns, and accept the award for Music City Bowl MVP.

An athlete’s and a team’s story goes beyond the field, so having content to reflect this will have higher share rates from student-athletes that will then generate a higher audience reach. Some of the most notable audience members are recruits who are in the phase of deciding which program to commit to. More often than not, recruits are following the athletes’ accounts — rather than team accounts — and will only see what it’s like to live that bowl experience through an athlete’s storytelling.

Empowering the athletes with content helps them powerfully and authentically tell that story, in context of the team, while also reaching highly desirable, engaged audiences. That’s a win-win for everyone.