Randall Cobb Increases Fan Engagement With The Help Of INFLCR 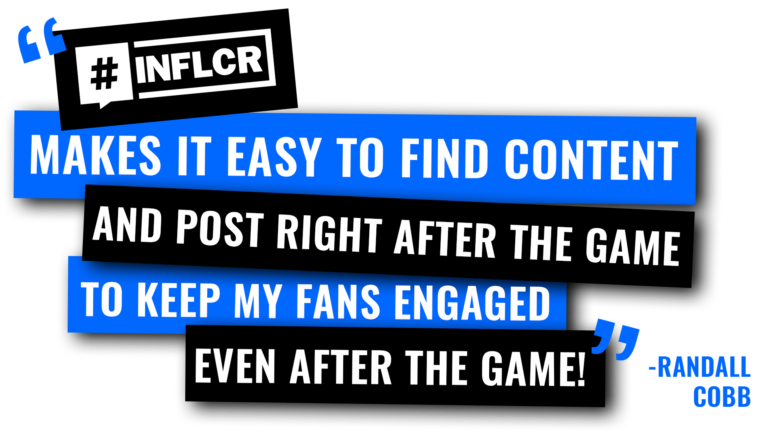 With a mission to serve storytellers, we look to deliver real time content to more than just #Ath1etes at the collegiate level.

Each of the athletes we serve have different goals for their social media. For one professional athlete in particular, his goal is to keep his fans attention after the 60 minutes he’s on national television.

As an NFL veteran with nine seasons under his belt, Randall Cobb isn’t new to the game. The social media game that is.

Cobb has been active on Instagram since July 22, 2013. Over the years his grid has consistently displayed his journey through life and football, with the occasional homage to his alma mater the Kentucky Wildcats. The purpose of his Instagram has stayed the same, but his strategy is what has changed.

In the 3 seasons before Cobb started using INFLCR, he averaged 7 action, practice and pre-game photos over a 4-5 month span. Between the same time span for this season, after he onboarded with INFLCR, he posted 12 times under that content type, with 5 of the photos being downloaded straight from the INFLCR app.

Take away the access to the content that INFLCR provided Cobb, and his post average for the 2019 season would have been back to his typical average of 7.

It’s our goal to make it as seamless as possible for an athlete to access content. With our AI integration, Cobb was tagged in 34 photos from our partner USA Today. From those tagged photos, he downloaded 26 of them amongst 62 app sessions. Eventually, he decided to post 5 of those photos to his Instagram to collect a total of 192,122 likes.

As an NFL player, Cobb has access to more than just the professional photos he’s tagged in. He can toggle between galleries to see any photos that were taken at a Cowboy’s game, which is useful as he has often showcased teammates on his Instagram. With this content access, Cobb downloaded and shared a photo from INFLCR with teammate Ezekiel Elliott who later shared it to his Instagram. This was a photo that Elliott wouldn’t have normally had access to without Cobb’s ability to download real time content.

Over a four and a half month span, his following grew by 8.43%. At the beginning of September he started with 475.3K and now has 513.3K, making his following increase a whopping 40K.

As Cobb said, “INFLCR makes it easy to find content and post right after the game to keep my fans engaged even after the game.” Not only is he keeping fans engaged, but his increase in post count has given him 40,000 more eyes checking back in after he steps off the field.