Proof That Student-Athletes Can Do It All In March Madness 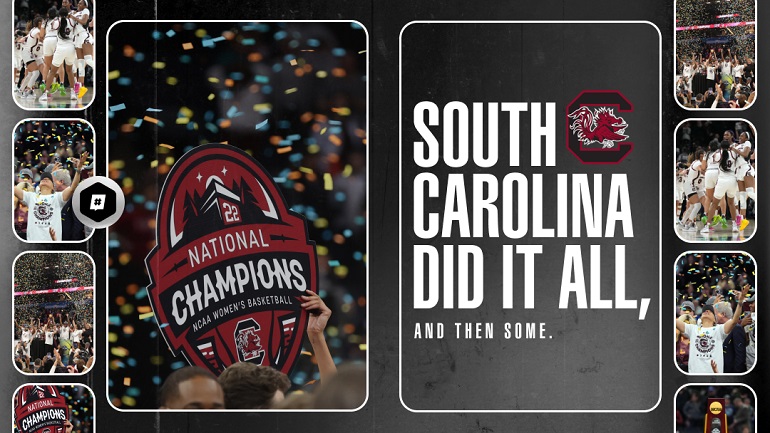 79-21. South Carolina came into their first game of the women’s March Madness tournament with unfinished business after falling to Kentucky in the SEC Tournament final. As the tournament went on, the Gamecocks held their ground, outscoring their opponents by an average of 25 points.

The season ended on a high, with a trophy in-hand and a laundry list of records, but how did South Carolina fare on social media?

Spoiler alert. They won that one, too.

During the season, some student-athletes were already putting NIL on hold. We heard that on INFLCR’s Instagram “NIL, LIVE!” series from athletes like Will Levis (Kentucky Football) and Masai Russell (Kentucky Track & Field). But what about social media?

Some might argue that in order for athletes to perform at the highest level, they need to push aside all other activities, including social media. For the Gamecocks, their postseason wasn’t filled with what seemed like a hiatus from social media like some of their counterparts. Instead, players ramped up their accounts while still playing at the highest level in collegiate basketball.

Their social presence paid off. With media attention at an all-time high, players’ content was rewarded with follower growth and increased engagement.

Let’s start with TikTok. Like other platforms, posting often is the best strategy. South Carolina student-athletes posted a total of 41 TikToks from the start of March Madness all the way to the end. The number of views on those videos? 6.44 million.

Content included hopping on popular trends, pregame dances, win celebrations and more. One student-athlete’s viral video had over 5.6 million views and 190,000 interactions. To make it even more impactful during this era…it was a paid ad!

Similar to TikTok, South Carolina Women’s Basketball made waves on Instagram during the tournament. From mid March to early April, the individual athlete accounts posted to their main feeds a total of 50 times (compared to another top seed only posting 10 times). Interactions stacked up to over 510,000 with total followers increasing by more than 98,000.

Two thirds of the follower increase for the individual student-athlete accounts came from two accounts who both had over 30,000 new followers after the tournament. The South Carolina Women’s Basketball team account also benefited from the team’s success, collecting over 14,000 new followers.

As mentioned before, the team ended the season with a list of broken records. One being celebrated is Head Coach Dawn Staley being the first Black coach, male or female, to have two Division I basketball titles. With recognition comes growth, and Coach Staley saw 23,581 new followers flock to her Instagram account.

How INFLCR Software Supported The Gamecocks

South Carolina student-athletes weren’t the only ones working hard during the madness. Creative staff uploaded 2,186 pieces of content for the team to INFLCR in under 20 days. Providing athletes with content always leads to increased usage. The team downloaded 468 pieces of content during the same amount of time, creating a total of 5 INFLCR-powered Instagram posts and a lifetime of memories.

Additionally, South Carolina Women’s Basketball was involved in a promotion with Under Armour for their jersey tees. Each jersey held licensing rights to the Gamecocks marks and player NIL, and became available before the tournament. The team was able to utilize INFLCR to distribute content for the promotion to then post on social media.

They Can Do It All

South Carolina had a massive impact on women’s sports on and off the court. They outperformed and outposted, grew their personal brands, managed their NIL businesses, capitalized on their NIL, supported their teammates, dominated on the court and much more. All of that, and they still went home with a trophy.