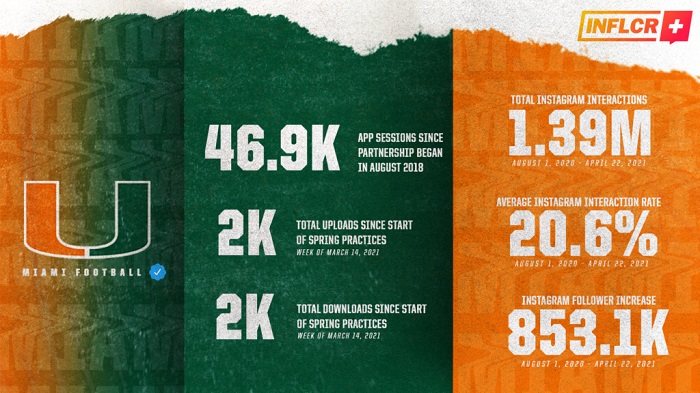 In December of 2020 Miami launched Momentum, powered by INFLCR.

Before that, the team was already using INFLCR to take social media by storm. We’re talking massive influence. Like 1.3M+ interactions on Instagram alone since last season as a team kind of influence.

Since August 2020, the combined team average Instagram interaction rate is hovering around 20.6%, and their collective following has increased by 853.1K.

Canes athletes are able to utilize INFLCR at its fullest potential because of their staff and coaches. Spring practices started for Miami the week of March 14. From then until now, staff have already uploaded 2,000 pieces of content. Athletes reciprocated the upload with 2,000 downloads + shares.

Like many of our other partner institutions, Miami athletes’ support comes from people who are dedicated to serving storytellers like us.

Two of those people at The U are Andy Vaughn and Tim Brogdon.

Andy, the director of player personnel, has a keen eye for ways to push the program beyond its limits. Brogdon said “Andy has been one of the biggest proponents of INFCLR and NIL education within the football department, helping pave the way for us to establish a curriculum and get it in front of the team. Andy has a knack for seeing NIL from the athlete perspective and comparing it to an outsider’s perspective which has spurred new ideas to add more depth to the Momentum program.”

The main focus for Momentum is to continue growing the department and the athlete’s potential on and off the field. Vaughn will be a key piece in that growth.

“As we continue to mold, assess and build Momentum, Andy will be instrumental in coming up with new opportunities and new topics to discuss to ensure our student-athletes have every tool we can give them going into the unchartered territory,” said Brogdon.

At INFLCR, Plus partners work with our NIL Strategy Manager, Marc Jordan. Since launching Momentum, Jordan and Brogdon have worked together to push the program further.

“Tim understands that each school is unique & Miami needs to set itself apart in the NIL space,” said Jordan. “He leverages his own expertise, our partnership at INFLCR as well as his relationships both on and off campus to build Momentum into something truly special. He does it all to empower his athletes and support the Miami Hurricanes.”

A former Miami athlete Brogdon is still supporting is Greg Rousseau. Rousseau was selected in the 2021 NFL Draft in the first round at pick number 30. INFLCR became a staple for Rousseau in August of 2019, and he has since logged 448 app sessions and 290 downloads + shares.

From last season until now, Rousseau has had 17K Instagram interactions and increased following of 5.3K.

As a first rounder, Rousseau’s social growth will continue to rise with INFLCR as an advantage in his pocket. Like other pro and former collegiate athletes, he can access The Players Trunk to sell some of his Miami gear now if he chooses.

Rousseau is already monetizing on another INFLCR Verified App. You can find his Cameo with a $25.99 request price tag, 14 reviews, and a 9 hour response time.

Brogdon, Vaughn, and Jordan will continue to expand Momentum, so we’ll keep seeing more athletes like Rousseau leave Miami with an established brand they can continue to capitalize on. With Rousseau being before Momentum’s time, the potential Canes athlete’s have with the addition of Momentum is limitless.