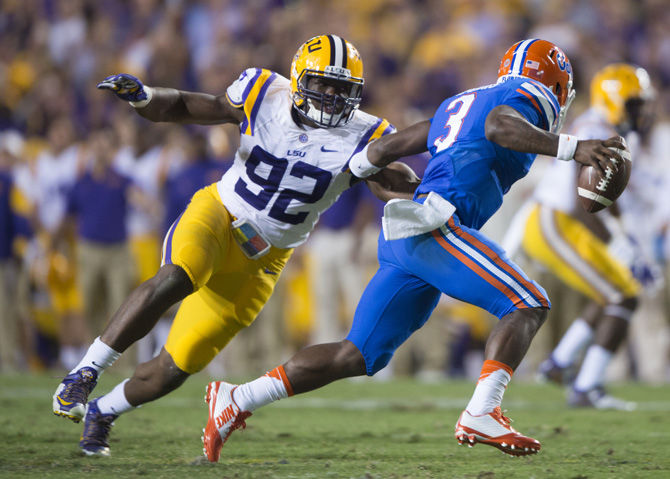 Using the wisdom he’s learned from being raised by his grandparents, Lewis Neal has been paving his way to success since high school. Growing up in Wilson, North Carolina (population 49,000), Neal used his first offer from North Carolina State to gain more offers. After decommitting from Ohio State University, he landed at LSU, where he was a four-year varsity player and two-year starter at defensive end.

For Neal, the motivation went and still goes beyond football. He took an AVID college prep class while at James B. Hunt High School, where he says he was forced to read Dave Ramsey and learned to start thinking about investing money. After seeing limited playing time as a freshman at LSU, and again as a sophomore, Neal said he began thinking about what he would do if he didn’t see the field. He began using his self-taught business skills to day trading on the Foreign Exchange and purchased a barber shop near campus, Hair Factory of Baton Rouge. His entrepreneurial spirit as a student-athlete was noticed and spotlighted nationally by the Washington Post.

“I always wanted to be innovative and create my own way so that’s what I did and everything just fell into place,” Neal said.

Once he started building his success off the field, his opportunities came on the field. It didn’t come without failures, a lot of work and sleepless nights, Neal said. He finished his LSU career with 47 games played and 24 consecutive starts to end his four years. He had 118 total tackles, 17 for a loss and 12 sacks.

Following the focus of being self-motivated, Neal pursued a spot on an NFL team after going undrafted in 2017. He signed as an undrafted free agent with the Dallas Cowboys, where he has also built relationships with developers during his time as a student-businessman.

“I try to use my brand and my platforms to keep inspiring those people who do great in life. You never know what life you can impact,” he said.

Neal recently visited with Influencer (INFLCR) founder and CEO Jim Cavale on the streets of the French Quarter in New Orleans for an INFLCR athlete ambassador interview. The two discuss Neal’s upcoming business projects (Foreign Exchange trading algorithms, a patent for 360 video and more), as well as Neal’s dream to one day own a professional sports team, as well as advice for current student-athletes to look toward their future:

– Don’t let your school use you, use your school/platform to your advantage.
– Make connections
– Create yourself as a public figure now
– Find what you like and don’t like and how you can make both better
– Be inspirational to build a great brand