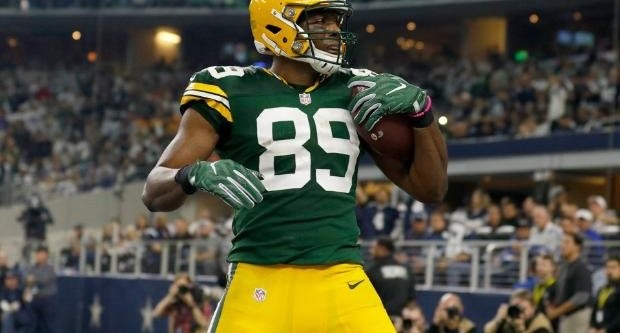 From toeing the sideline to complete the greatest catch of 2016 to running an online fashion business and philanthropy efforts, NFL tight end Jared Cook is leveraging every bit of his time as a pro football player to better his future.

Born in Birmingham, Alabama, Cook graduated high school from North Gwinett High School in Suwanee, Georgia and went on to play for the University of South Carolina. After being selected by the Tennessee Titans in the third round of the 2009 NFL Draft, Cook spent his first nine seasons in the NFL on four different teams, including a move to the Oakland Raiders in 2017.

Cook became a household name in 2017 after toeing the sideline in Dallas to catch a 36-yard pass from Aaron Rodgers on third-and-22 with three seconds to play. The catch set up the game-winning field goal for Green Bay, 34-31, over Dallas to advance to the NFC Championship game. It also earned Rodgers and Cook an ESPY for Best Play of the Year.

However, Cook doesn’t only identify as a star tight end, but as a husband, father and entrepreneur.

In this Influencer (INFLCR) athlete ambassador interview, INFLCR founder and CEO Jim Cavale sat down with Cook after a speaking engagement in Nashville to talk about his journey as entrepreneur and ways athletes can use their role in the game to build toward the future.

Cook says his story is about trials and tribulations, but he says to always think forward. One of the ways he is looking forward is by already building his life after sports through launching a men’s fashion company, sponsoring an annual high school basketball tournament, volunteering and more.

“It’s ok to think about the future and make plans and make steps to propel you,” Cook said. “Just don’t sit stagnant … That’s a problem in our industry. It’s good to start thinking of those things early and start setting goals for future.”

He sees his future as that of being an entrepreneur after deciding long ago his football mentality of being unstoppable also relayed to how he wanted to approach business.

While in the game, rubbing elbows, shaking hands and building a positive name recognition is key, according to Cook.

“One of the perks that comes with being a football player is it gets you in different circles or positions you could have never get there or it would have been more difficult to get there,” he said. “It starts with taking care of your job on the field, and after that it comes easy.”