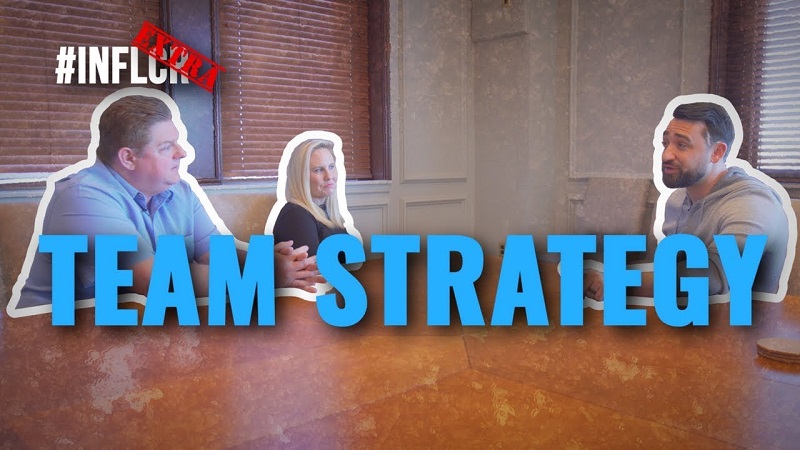 The two days at the John Hand Club in downtown Birmingham served an important role in shaping INFLCR’s vision, goals and strategy as the company aggressively moves ahead after completing a $1 million post-revenue seed round of fundraising.

In this EXTRA episode, Jim sits down with Ballard and Stephens to discuss the evolution of media during their careers, some of their key “a-ha” moments in their own experiences and how they see the industry continuing to evolve as INFLCR seeks to serve storytellers in the age of social and mobile distribution.

Ballard’s role as VP of Client Strategy puts her experience to work for INFLCR clients to maximize the impact of their investment by most effectively using the product. Stephens’ role as Director of Business Development puts him on the front lines of the relationship with potential clients.

Being on the front lines of innovation is nothing new for Stephens, who began his career as a print journalist while in high school. With a career that parallels the rise of digital and social media, he has played a role in transformative change in the digital era at many media companies and as a former president of the Associated Press Sports Editors.

Here is more from Stephens, in his own words:‍

I’ve lived at the intersection of sports and social media almost from the moment sports journalists discovered Twitter and our world began to trend with hashtags and become animated with GIFs.

I directed the implementation of social media strategies at two Florida newspapers, the Orlando Sentinel and the South Florida Sun-Sentinel. It was there that I learned how the audience, not the journalists, could determine what was “news.” From crowd-sourcing headlines to reaching key sources through direct messages to adapting our distribution through the disruptive force that is the mobile phone, I got to be on the front lines of real-time evolution.

Later, at CBS Sports, I was part of teams that livestreamed the Super Bowl, created dozens of daily video segments and produced digital-only documentaries while also going hands-on with dozens of CBS brand social-media accounts. And at SportsManias, I helped a start-up innovate through Artificial Intelligence-driven social curation and mobile-messaging with animated emojis to create new revenue streams and become the fastest-growing sports app in the U.S.

All of that prepared me for my new role at Influencer (INFLCR).

When I first saw CEO Jim Cavale’s story  — in my Facebook timeline, of course — I saw the vision for the opportunity I was looking to achieve as I was relocating from Florida back to Alabama, my home state. The vision for INFLCR is simple: We exist to serve storytellers. And on social media, we’re ALL storytellers. A lot of attention is rightfully placed on the challenges in the media industry today, but here’s a truth: There’s never been a better time to be a storyteller. We have amazing tools with which to tell and share those stories and to be more immediate, intimate and essential to the audience that wants to connect where they live — on their mobile devices.

In my role as INFLCR’s director of business development, I help teams, leagues and athletes share their stories through software that allows them to effectively and efficiently store, share and distribute their digital assets to their brand ambassadors — and then track the collective lift of all of those coaches, athletes, recruits, alumni and perhaps even sponsors or fans.

It’s an awesome product — one I could only imagine back in my days in media when our idea of distributing content to *our* ambassadors (reporters and on-air talent) typically meant texting them the image and begging them to post it.

Jim’s track record as an entrepreneur is proven, so it shouldn’t be surprising that he’s building an impressive team. At the same time he brought me on with 20-plus years of leadership in media and digital operations, he added NBC Universal veteran Liz Ballard as VP of Client Services. Between us, that’s 35-plus years of high-level experience in sports media/technology, and we bring into the room a lot of creative energy, ideas and passion for how the INFLCR product can help connect sports fans to the teams, leagues and athletes they love.

I began my sports media career as a teenager; I covered my first Iron Bowl as a sports reporter before I took my first college journalism class. I’ve been fortunate to bridge the transition from old-school print to modern technology. I never imagined that one day I’d report news on a phone 140 characters at a time, or that I’d someday share the NCAA Tournament bracket with the world in real-time with the press of a key. I got to do all of those things. And if you’d have told me back in 1987 that I’d grow up to be an emoji salesman, I’d first have asked you, “what’s an emoji?” I did that, too.

Now, with INFLCR, I get to go back to my roots — helping people share their sports stories with the world — with the most awesome tools. This is going to be fun.