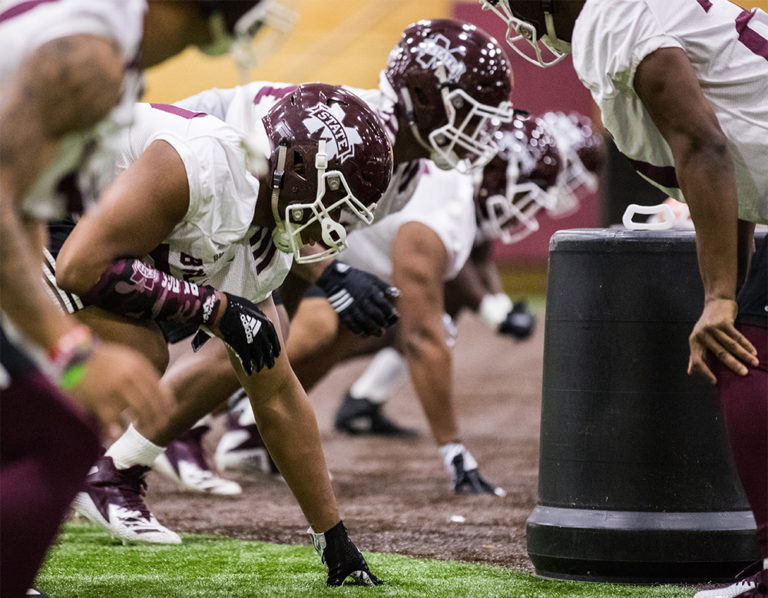 INFLCR’s team collected data from all of our SEC client schools during their spring football games, in preparation for the much bigger fall season.

We analyzed what kind of content our athlete users focused on, saw a new kind of content plan that influenced a top tier recruiting year, and calculated the overall reach that our user social media posts achieved.

The numbers are in, and here’s what we found after looking at four of our SEC clients: Ole Miss, Auburn, Kentucky, and Mississippi State.

Football’s spring offseason is a time when the INFLCR team is able to gain insight into how athletes think, what they’re interested in, and the kind of content that athletic departments should be passing along for them to share.

Content shared from schools and USA TODAY’s photography network came from a collection of practices, photo shoots, and one bigger exhibition game or scrimmage for these four teams.

For Ole Miss, who had the most content downloads during this spring offseason, the most popular photo content came from a staged photo shoot! Meaning that the guys at Ole Miss were most interested in downloading and sharing over 350 staged poses, funny faces, and other personal content from INFLCR.

That’s in contrast to Auburn’s football team, who were most interested in their A-Day game and the action shots that were captured. That photography included both Auburn staff photos and USA TODAY Sports images:

Mississippi State football players followed a similar trend, being excited about content from their Maroon & White exhibition game. However, when you add up the engagement from all of their practice photos, the practice content downloads and shares actually outnumber the true “game day” content.

Kentucky players, while having fewer overall downloads, actually ranked as second overall in their content’s performance on social media. They chose more of the game and practice photos to download and share, and were selective with their content to turn it around into high-performing social media posts.

While spring might not a time be when athletic departments traditionally focus on creating the most football content, it is likely when the most important people to the future of your football program are looking at your social media: recruits.

And while recruits might follow your team channels as well, what they are really interested is seeing what their possible future teammates are doing on social media.

With Signing Day February 5th, just because your team is off in the month of January doesn’t mean your social media should be. By empowering athletes with offseason content, your school is able to reach these recruits with your best ambassadors (your athletes) through social media.

Ole Miss, for example, delivered over 300 pieces of extra 2018 video content and highlights to athletes, exactly one week before signing day.

Think that was an accident? Ole Miss signed their best recruiting class in Coach Luke’s tenure. Teams that understand the power of their social media audience are changing the narrative in recruiting.

Football Audience Reach in the Off-Season

Our INFLCR student-athletes from these four SEC schools downloaded or shared 1600 unique pieces of content. That content ended up reaching a combined (Instagram) audience of over 775,000 people.

That comes out to about 480 people reached, per content piece, in additional marketing and brand awareness for these four SEC football programs. That’s new value coming from photography and other content that these schools were already producing on their own.

165,000 people said “yes” to Kentucky, Ole Miss, Auburn, or Mississippi State, while supporting their favorite players on the team. That’s in the off-season!

Those audience engagement numbers reinforce our idea that athletic department branding and marketing runs year-round, not only during a given sports season.

By using the approach of giving athletes their own content and letting them be the owners of their team’s brand, these four SEC teams were able to amplify their own marketing efforts while building anticipation for the upcoming fall season.