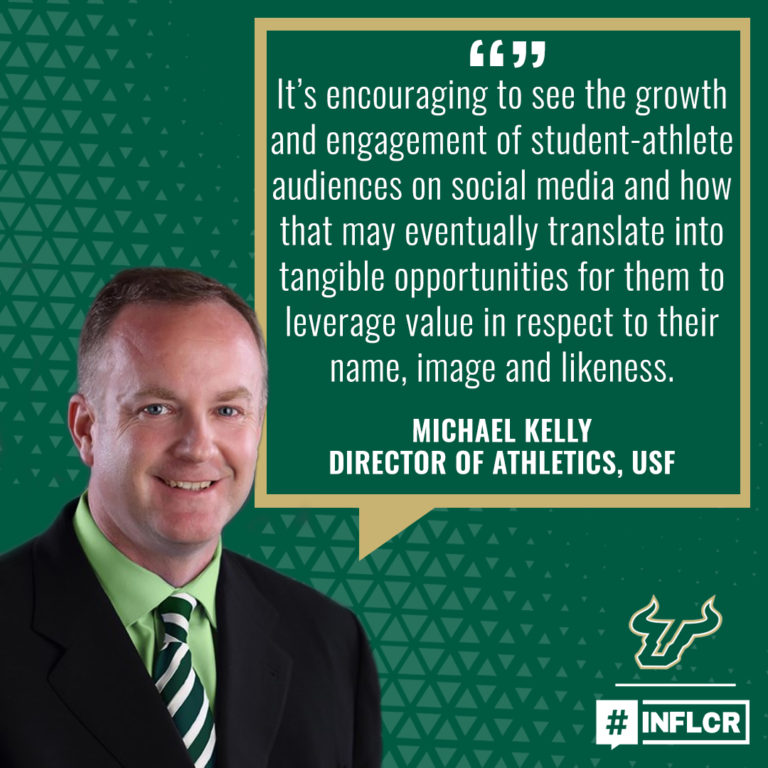 As the NCAA prepares to adopt new legislation that will allow collegiate student-athletes to monetize their Name, Image & Likeness (NIL), a common misconception is that opportunities will primarily benefit the biggest stars in the biggest programs.

An INFLCR analysis around our all-sports software partnership with University of South Florida Athletics [who competes in the American Athletic Conference], lays out the potential of growing an audience valued at $1 million before the rules even are implemented.

More than 400 USF student-athletes in 17 sports currently use their INFLCR athlete app to access editorial content produced by USF Athletics to share across their individual social-media channels. The INFLCR admin platform then tracks key metrics around the quantity and quality of the audience these student-athletes reach individually and collectively. Even before these rules go into effect, their efforts on social media have created an audience value opportunity of more than $700,000 annually according to data compiled by INFLCR.

“A lot of people mistakenly believe that the benefits of the new legislation will mostly go to the elite players in sports like football and men’s basketball from the most prominent programs,” said Cavale, referring to the ‘autonomous’ SEC, ACC, Big Ten, Big 12 and Pac-12 conferences.

“There will be elite athletes in those programs who will have the ability to create lucrative sponsorship opportunities for themselves because of their large followings on social media.”

“However, we believe that programs outside the Power 5, and sports beyond the Big Two of Football and Men’s Basketball, will also have significant opportunities to capitalize when the new rules go into effect for the 2021-22 academic year.”

Cavale says athletes at all levels can create revenue for themselves through social-media platforms such as Instagram, Twitter, Youtube, TikTok and others, and they can maximize these revenue opportunities that will come in the future, through a multi-dimensional editorial storytelling strategy on their social media channels in the present.

Student-athletes have been growing their NIL value since the inception of social media. Team success on the field or court, combined with the student-athlete’s ability to tell their personal story through the sharing of editorial content to their Instagram or Twitter, has a data growth narrative of social media activity, follower count and engagement rates.” Jim Cavale, INFLCR

“As college athletics leaders in compliance and other key departments begin to study the NCAA’s recent recommendations around student-athlete NIL regulations, it is incredibly important to delineate the difference between editorial and commercial posts on social media,” says Cavale.

“Commercial social media posts involve sponsorships that pay the athlete to reach the social media audiences associated with their NIL. Commercial social media posts will be a key part of the student-athlete NIL era of college sports coming in 2021-22, because while there are multiple settings that a student-athlete will be able monetize their NIL, the purest and most accountable is social media – you can calculate fair market values off of transparent and objective stats per athlete (ie. followers) and the FTC guidelines already require transparency around sponsorship transactions between the athlete and the sponsor.”

“What people tend to overlook is the reality that commercial posts are tied to a value that has a lot to do with your editorial social media posts, which involve no sponsor whatsoever.

Student-athletes have been growing their NIL value since the inception of social media. Team success on the field or court, combined with the student-athlete’s ability to tell their personal story through the sharing of editorial content to their Instagram or Twitter, has a data growth narrative of social media activity, follower count and engagement rates.”

INFLCR’s NIL working group, led by former ESPN and Dallas Cowboys content leader and INFLCR COO Neeta Sreekanth, created a multi-dimensional formula to assess athletes’ per-post value for branded content on social media. Sreekanth and her team have also had the benefit of data from more than 21,000 current student-athlete users who rely on INFLCR to grow their social brand organically.

INFLCR’s formula takes into account a variety of factors beyond followers on social media, starting with the core factor of all athlete social media channels – editorial storytelling activity – and other key factors including engagement rate, team performance, sport played, the conference and the market of the team. This formula has been established to help INFLCR clients and other collegiate athletic programs understand the impact and opportunities that NIL may provide for their athletes.

“We project that USF athletes, competing in the spotlight of the American Athletic Conference in a market like Tampa, Florida, already have an annual audience value that exceeds $725,000, even before the rules go into effect,” Cavale says. “Based on our year-over-year growth with partners like USF, we expect this value to grow significantly over the next year, in preparation for NIL, and this can become a powerful recruiting story for the teams at USF.”

To that end, USF’s administration and content strategy is about empowering its athletes with editorial content and educating them on how to responsibly use it to enhance their opportunities, said USF Director of Athletics Michael Kelly.

“Our staff has valued the investment of resources, time and talent into the strategic growth of our student-athlete brands both within our Bay area community and nationally,” Kelly said.

“It’s encouraging to see the growth and engagement of student-athlete audiences on social media and how that may eventually translate into tangible opportunities for them to leverage value in respect to their name, image and likeness.”

At their current growth rates using content distributed via INFLCR, Bulls athletes project to increase the value of their audience to almost $1 million in 2020-21, just in time for those still in the program when NIL goes into effect to capitalize on it.

The key to maximizing this, Cavale says, exists in what USF student-athletes have already been doing: telling their story authentically and organically in non-monetized posts featuring editorial storytelling content. Easy access to quality editorial content helps the athletes post frequently, building their following as they compete for USF on the field or court. That activity will lead to increased engagement and a more potent opportunity for occasional monetized posts when it becomes possible to do so.

Former USF basketball star Laquincy Rideau is an example of how that activity might look. In his two seasons using INFLCR at USF, he was tagged in more than 1,000 editorial photos & videos produced by USF Athletics and distributed via the INFLCR app. In that time, Rideau grew his audience more than 40 percent, sharing more than 10 percent of the content he was delivered by INFLCR to his Twitter and to his Instagram stories and posts. He enters his professional career with an audience valued at almost $8,000.

“Our coaches and staff are committed to providing the tools and environment for USF student-athlete brands to thrive,” Kelly said, “and it’s very exciting to see how INFLCR continues to use vision and innovation to help us do just that.”