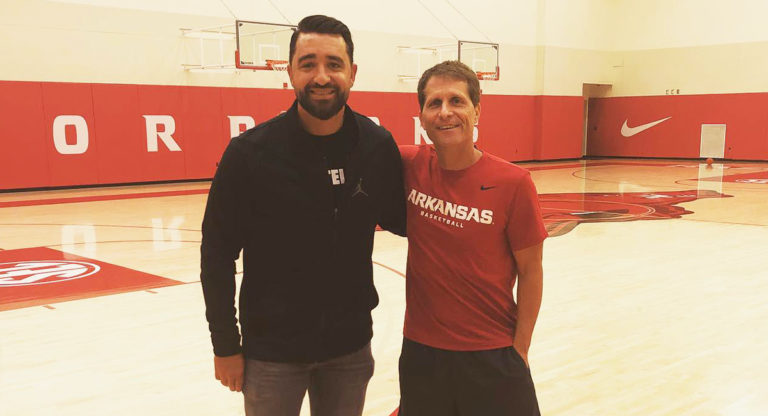 Elementary school. That’s when Eric Musselman, head men’s basketball coach of the Arkansas Razorbacks, learned a valuable leadership lesson that has followed him throughout his life and career. This lesson came from his father, Bill Musselman, whose basketball coaching career started with the San Diego Sails of the American Basketball Association and ended with the Minnesota Timberwolves of the National Basketball Association (NBA). He would tell Eric the story of NFL coaching legend Paul Brown telling him that the time to get his squad’s buy-in as a coach was within the first 5 minutes of his first speech to the team.

However, team buy-in to a coach’s plan isn’t all you need. “You’ve got to be internally-led, you have to be a self-coached team and a player-coached team to be really successful,” Musselman said. Players have to be willing to lead the team where their coach cannot. Musselman’s father told him early on in his career that he needed to recruit for and create this type of team culture, and for Eric “it was a big-time learning lesson that it’s not about the X’s and O’s.”

Beyond team buy-in, Musselman has made a point to focus on fan support. It isn’t enough to have trophies in the case if you aren’t playing your part in the big picture. For Musselman, “It’s way more than the game,” and his team’s branding and marketing are an important factor in their overall success.

Musselman used to be embarrassed when his dad, former basketball player at the University of Minnesota, would take basketball t-shirts he had stored in his trunk and hand them out at a Minneapolis McDonald’s as a way of promotion.

As Eric’s career progressed through the Chinese Basketball Association, United States Basketball League, NBA, and NCAA, he developed an appreciation for his dad’s nontraditional approach to marketing as a coach. It wasn’t until he became head coach for the University of Nevada Wolfpack men’s basketball team that he started to implement his dad’s marketing tactics on numerous levels.

Eric said that by utilizing Nevada’s social media and quirky ways to spark interest, like his dad’s theatrical team warm-up the Wolfpack performed his first season, “[they] could turn [them]selves into a national brand.” National awareness was important for a Nevada program that would most likely not have any in-state recruits, and needed to be known around the country in order to get top guys on the court. Musselman found ways to catch attention, like a #DunkChallenge on the streets of Reno, so that his teams story became more than the numbers.

Brand awareness for Eric Musselman means involving the entire family. Video ideas, most of which were his, would get shot down at the kitchen table by his wife and three kids. Mariah, his daughter, even got in on several videos at Nevada. Need to know how to pack for the NCAA Tournament? She’s got you covered.

Eric’s family approach to coaching today has been molded from lessons and tactics learned since he was just a kid. He would beg to go to Williams Arena at the University of Minnesota to watch his dad’s practice with the Minnesota Timberwolves, which concluded with his own shootaround. Beyond his father’s influence, Musselman mentioned current University of Oklahoma men’s basketball head coach Lon Kruger, who “really taught how you have to integrate your family with your job.”

Jim Cavale catches up with Coach Musselman during an Arkansas program visit.

INFLCR founder and CEO Jim Cavale caught up with Musselman in Fayetteville for the I Want Your Job (IWYJ) podcast episode 9, to talk about this importance of a program’s bigger picture, the influence from his family, and how heavy hitters in the industry shaped his mentality.

After a CBI Championship and 3 NCAA Tournament runs with the Nevada Wolf Pack, Musselman continues his college ball journey by signing with the Razorbacks. Just like Musselman did at Nevada, he’ll do at Arkansas in building a national brand through recruiting, culture, and of course, social media.

As Eric said, “we’re trying to entertain, we’re trying to win, and we want to do it with some flair and some pizzazz,” because coaching basketball is more than just a game.

Watch Coach Musselman and the Razorbacks story unfold on Twitter: