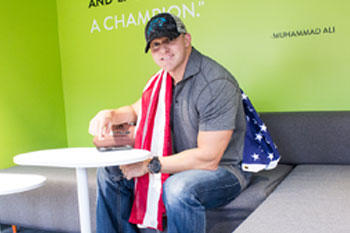 Courtenay WhitmanOffice ManagerHometown: Elkin, NCAn extremely optimistic and driven person, Courtenay centers his life on his three main passions: family, country and religion.Although you would never believe it, Courtenay claims to be introverted by nature. His genuine kindness and inherent ability to build strong relationships makes him a vital part of the team where his current focus is optimizing the human performance of the entire company.He loves spending time outdoors fishing, camping or hiking, along with exercising and watching his favorite NFL team, the Carolina Panthers. Some of his future goals include hiking the entire Appalachian Trail, becoming a professional psychologist and enabling people to thrive in everyday life. Three fun facts about Courtenay:1. He was a walk-on outside linebacker for the Virginia Military Institute and retired from the U.S. Army in 2016 as a Special Forces Green Beret.2. His favorite hobby is coaching youth sports for his children, Charlotte and Bryce.3. Met his wife, Tara, while volunteering at Stoney Point Fire Station 13 where she was a Lieutenant. She lit him on fire, figuratively, when they first met.Connect with Courtenay:Twitter: @cwhit_teamworksLinkedIn: Courtenay Whitman