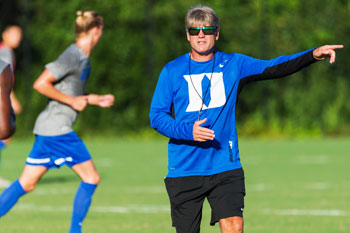 John KerrHead CoachDuke University Men's SoccerGet to know John:If you could have dinner with anyone living or not, who would it be?My parents, who've passed away.Where would you take them?Parizade in Durham.What is something on your bucket list?Visit Australia.What was your childhood dream job?To be a pro soccer player in Brazil and then become a college soccer coach at my Alma Mater.How did your father influence your life?My father had a massive influence on who I am as a person and my career path. I was lucky enough to grow up in the soccer environment in the United States because my dad played for many years. I was actually able to watch him play and hang around his teams because we were only 20 years apart. In 1975, I was a ball boy for the New York Cosmos when my father played with the great Pelé. That is a lasting memory that I have. A couple of years before that, my dad was the first Scotsman to ever play in Mexico. The experience of living in Mexico City, while my father played with a massive club called Club América, had an incredible influence on my love for the game. I got to see what the game means to people and cultures. That is what I’m trying to duplicate in the United States. I think the country is going in that direction, it will just take a little bit more time.What experience has had the biggest impact on your career?One of the experiences that really impacted me was during my professional playing career. There was a crossroads in my career where I came back from Europe and played one season of indoor soccer in San Diego, and the league folded. I had to make a decision to continue and search again for another team, or take an opportunity to become an assistant coach at Duke University.My curiosity led me to coming to Duke in 1992 as an assistant. When I was in high school I thought it would be great to be a college coach, but being an assistant under John Rennie in'92 confirmed that for me. It was an incredible experience that changed my life, because I knew then that I wanted to coach at the college level.I had the pleasure of working with Garth Lagerwey, who is the President of the defending MLS Champion Seattle Sounders, and Jason Kreis, who is the current coach of Orlando City SC in the MLS. I was able to help in the progression student-athletes on and off the field, which was very interesting and rewarding for me.What was the biggest lesson that you learned while playing in Europe?You have to perform. In order to perform you have to prepare. They’re not going to hand out any opportunities just for the sake of it, you have to go and earn it. The opportunity is fleeting and you have to make the most of it. At the professional level if you don’t do well, they’ll release you. I’ve been released about 12 times from different clubs. Learning to cope with disappointment is not easy, but I learned a lot about dealing with challenges and obstacles during that time.If you could travel back in time and speak to your younger self, what advice would you give?I didn’t realize before I got to the professional level that I could’ve done even more. For example, I could’ve worked on my weak foot, my heading and my ball control. It was all pretty good, but not unbelievable. I would tell my younger self to work harder or do more repetitions. I would say, “Work on all your skills, not just the ones you’re good at.” It’s easy to work on your strengths because it’s fun. But when you have to improve things that you’re not good at, it’s challenging.How did your experience as a player help you transition into being a coach?It’s helped me a lot because, as a former Duke soccer player, I understand what our players are going through. I've been in their shoes. I try to help them overcome obstacles that are seemingly complex to them, that I've already experienced. I communicate to them that it’s not as bad as it seems. All my experiences, good and bad, have enabled me to be available to not just the star players but the ones who are struggling as well.What your most repeated message to your teams?My famous saying is, “What a great day it is to be a Duke soccer player.” There are a lot of people who would rather switch their position from what they’re doing now to become a student-athlete. That is especially true at Duke, because here you can perform at a high level in an unbelievable environment with great conditions and facilities. I tell the team to maximize your opportunity while you’re here because it’s fleeting and it will disappear quickly. Every alumni soccer player that comes through says the same thing: “Boy, I wish I was back in your shoes.” Every single one.