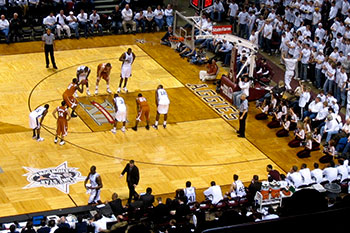 Peter WardenAssistant Athletic DirectorTexas A&MHow has Teamworks changed the way you interact with your team?This generation is on technology all the time. It’s in their hands, and it’s what they do. It’s how they interact and how they socialize. To engage them in the way that they engage the world is the best way to communicate with them. We used to use team group texts, or before that mass texts, but someone had to man and control that. We also weren’t able to preschedule anything. Teamworks has allowed us to become more sophisticated and take advantage of technology. It’s allowed us to meet our athletes where they are. Communication is not just driven from the top down anymore; the athletes can touch base and know what’s going on.How has your staff responded to using Teamworks?Adding any new technology is a little bit of a challenge for the older generations, but the younger generation has really embraced it. And Teamworks is allowing us to marry the older and younger generations together. It’s teaching our older generation not only how to use the technology, but also how it’s received by the younger generation. The good thing is that our staff is embracing it and certainly realizes that there is value in it.How have the athletes responded to using Teamworks?The challenging thing about this generation of athletes is that they’re so used to having things being done for them. With Teamworks, we can shift more responsibility back on them to become more accountable.Which features have you been using the most?The calendar and academics have been used the most by all our staff and teams. We still need to get sports information to be more consistent with it. We’ve told them “Get that on the calendar, so the rest of us can see it.”How have you liked working with the mobile app? Have you used it more than the web?I like the new version a lot! I still sit down at the desktop, but I find myself using the new version of the app much more consistently - especially when I need something done on the fly. If I’m standing in the lobby and someone asks me a question, I don’t have to go back to my office and answer them. I can just pull my phone out of my pocket and pull it up right there.What would you say to other programs that try to use their recruiting and compliance systems do what Teamworks does?I would say that the interface with Teamworks is better. What I use in operations, the functionality that Teamworks has specifically for communication and operations, is much deeper and more efficient than what is available within recruiting and compliance systems. So if I had to say something to another program, it would be to question everything. Ask yourself if you’re getting the most out of the system you are using. Don’t assume it’s all there or that whatever you’re using is all there is. If you haven’t taken an opportunity to stop and take a look at what else is out there, then you don’t know what you’re missing.Is there anything else that you want to add?The number one thing that you all do is support. That is without a question what makes you different from all the other groups and systems I’ve worked with. The culture of support you guys have - whether it’s checking in, taking the time to train us on different aspects of Teamworks, or being willing to talk to people and teach us how to interact with the program - is hands down the best in the business!