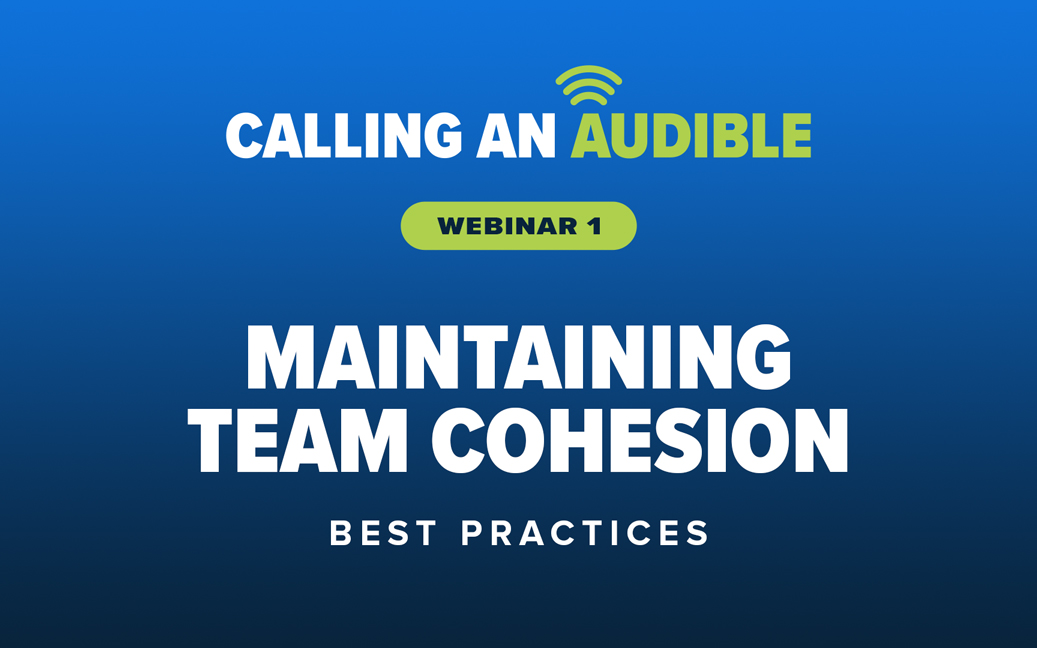 Calling an Audible: Maintaining Team Cohesion Best PracticesWatch the WebinarTeamworks Coronavirus Assistance ProgramMaintaining Team CohesionFeeling like a team when the team can’t be togetherAs Rod Brind’Amour, Head Coach of the Carolina Hurricanes, stated, “We’re solid as can be and tight. I’m not going to manufacture it.” No doubt, the connection that teams typically feel is not the same today as it is when a team is together, competing and practicing. Athletes, especially at the collegiate level, “want connection,” said Patty Gasso, Head Coach of the 4x NCAA Champion University of Oklahoma Softball team. “They want connection with me. They want connection to each other...So that’s the toughest question, right, is how do I keep that going when I can’t look at them and when we’re physically not in front of each other?” Coaches across the world of sport are innovating to maintain team cohesion and below we’ve captured a few best practices.1. Team EngagementIn the first few days of social distancing, every team worked quickly to implement a resource for video chats. Those chats have evolved from simple team meetings and one-on-one check-ins. At Oklahoma, Coach Gasso’s team is hosting cooking demonstrations on Zoom, where four athletes take turns showing their teammates a new meal and how they prepare it. They’ve also brought in guest speakers to their Zoom meetings. Following a presentation, the team breaks out into small groups and is given a question to brainstorm and answer. They then come back together as a full group and review what they’ve learned. 2. Team CollaborationWhen there’s a championship to celebrate, coaches are pulling their players into the process. With North Carolina Central’s recent men’s basketball regular-season title, head coach LeVelle Moton wanted to gather his team’s input on the selection of their ring. “Things like that keep them actively engaged and motivated,” said Coach Moton. 3. Virtual CoachingCoaches and athletes are all experienced with reviewing game film, but now is a great time to explore how to actually coach a group using video. “Our strength guys have put together videos for the guys to do in-home workouts,” said JB Bickerstaff, Head Coach of the Cleveland Cavaliers. While many athletes are having to alter the way that they typically train, the familiarity with and guidance from their training and coaching staff can help maintain some sense of normalcy and preparation. 4. Fan EngagementAs coaching staff and players are feeling a sense of loss without their typical daily sporting actions, so too are their fans. Team marketing and social media staff are driving unique ways to engage fans. The Hurricanes broadcast team is hosting Zoom chats with small groups of players and distributing them on the team website and social media. According to Coach Brind’Amour, these experiences are also beneficial for the players. “I think it helps a little bit for the guys even. That they’re on it together.”Maintaining team cohesion when the team isn’t together is a new challenge, but one that is being met with increasingly creative ideas. If you have a great idea that you’d like to share, tag @teamworks and include #teamcohesion.