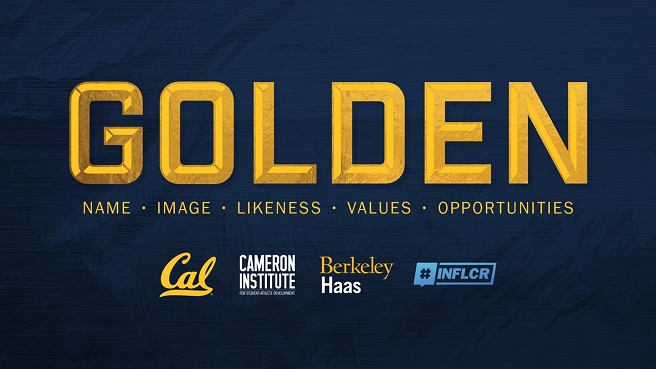 Cal Athletics announced today the GOLDEN program, a comprehensive set of resources for student-athletes to build their brands and take advantage of new name, image and likeness legislation at the country’s No. 1 public institution.

GOLDEN features four primary components and incorporates world-class resources available at the University of California, Berkeley, including a partnership with the Haas School of Business. GOLDEN also will utilize the innovative Cameron Institute for Student-Athlete Development and a department-wide agreement with INFLCR, as well as capitalize on Cal’s alumni network and access to industry leaders in Silicon Valley and beyond.

“We’re excited to launch our NIL program, GOLDEN,” Director of Athletics Jim Knowlton said. “The University of California, Berkeley has always been an amazing place for young men and women to build their brand and launch their careers. With the new NIL legislation in place, GOLDEN will help provide additional tools for Cal student-athletes to capitalize on their value in the marketplace in a distinct Cal way that builds on their achievements on the playing fields, in the classroom and in the community.”

“We are excited for the opportunities on the horizon for student athletes,” Crandall-Howell said. “Cal Athletics is invested in building a support network that will equip student-athletes with the tools and education that will help them build their unique brands and set them up for enduring success.”

To create the GOLDEN program, Cal Athletics assembled an NIL Working Group to consider how best to support student-athletes, to monitor the landscape and to explore options prior to the implementation of the new legislation. The committee included athletic department staff, current and former student-athletes, coaches and faculty members.

“Participating in Cal’s NIL Working Group that is developing the infrastructure and support for our current and future student-athletes has been fruitful,” said Lorenzo Alexander, a star defensive lineman for the Bears from 2001-04 who played 14 seasons in the NFL. “I’m pleased by the diversity of the group and the perspectives being shared with the intent of how to best serve our students. It is still early in the process, but I look forward to the enrichments and resources we’ll continue to develop through our partnerships with the Haas School of Business, the School of Social Welfare, and the Cameron Institute.  The GOLDEN program will help Cal student-athletes define their values and find NIL opportunities that align with those values.”

Added senior safety Elijah Hicks: “I have been fortunate to represent Cal student-athletes on the NIL Working Group to help implement NIL at Cal. The group developed the GOLDEN program to help student-athletes maximize what they can make using their name, image and likeness. NIL will allow me to expand my brand by partnering with companies that have similar values as mine, such as intercepting poverty for struggling college students.”

Kellie McElhaney, a member of the Haas School of Business faculty, also participated on the working group and the planning process that created Cal’s NIL program. “I’m excited to be part of Cal’s GOLDEN program for supporting student-athletes in their NIL endeavors,” she said. “Personal brand and equity-fluent leadership are integral parts to NIL. I look forward to working with other campus and industry leaders to help our student-athletes thrive in this new environment as they find their voice, their values, and the positive impact they want to make in the world.”

INFLCR
Cal Athletics has partnered with INFLCR, the industry’s leading brand-building software, and made it available to all 850 student-athletes for each of the department’s 30 teams. Student-athletes are able to receive images and videos in real time to be able to share on their social media accounts. The INFLCR app will also assist with NIL education, help with connections to business and sponsorship opportunities, and provide an easy-to-use platform for NIL reporting to ensure compliance with NCAA and state regulations.

Campus Partnerships
Through the GOLDEN program, Cal student-athletes will be able to take advantage of campus partnerships, including with the Haas School of Business, the second-oldest business school in the United States and considered one of the world’s leading producers of new ideas and knowledge in all areas of business. GOLDEN also plans to offer a speaker series featuring UC Berkeley faculty and industry leaders who will cover such topics as NIL fundamentals, how to select an agent, brand building and entrepreneurship.

The Cameron Institute
Built upon the four pillars of leadership & personal engagement, career development, high performance & well-being, and community engagement, the Cameron Institute is a comprehensive, data-driven program for developing the total student-athlete. Through The California Way, it aims to help Cal student-athletes become multidimensional, authentic leaders who live their core values and are committed to excellence with a high-performance mindset. The Cameron Institute officially launched in the fall of 2020 and originated with a $12.5 million investment from Bryan Cameron that established an endowment to help support the initiative in perpetuity.

Cal and the Bay Area
Cal student-athletes attend school in one of the most dynamic environments in the country, close to Silicon Valley and home to the sixth-largest media market in the United States. Nearly 40 Fortune 500 companies are based in the San Francisco Bay Area, and the Cal alumni network is more than 500,000 strong, including over 170,000 who reside in the Bay Area. With the Golden Bear Network – a part of the Cameron Institute – they have access to a well-connected and robust network of alumni and professionals and are provided tools and guidance to flourish in their chosen profession, including internships, job opportunities and other meaningful experiences to build their careers during and after graduation. The University of California, Berkeley is consistently ranked as the top public institution in the country, with nine current faculty and 31 alumni having won the Nobel Prize. In athletics, Golden Bear teams have captured 97 national team championships, and Cal’s alumni and students have earned over 200 medals at the Olympic Games.