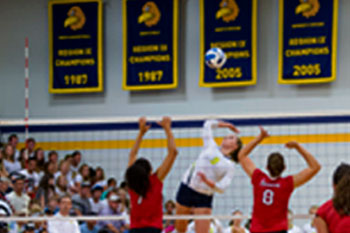 Austin AlbersHead CoachWomen's Volleyball--Laramie CountyCommunity CollegeGet to know Austin:If you could have dinner with anyone living or not, who would it be?My grandfather, who passed when I was in high school, was also a coach. Now that I’ve grown a little more mature and have gotten into the coaching world, there is so much more of his wisdom that I could tap into.Where would you take him to eat?A fancy restaurant in a big city, like the top of the Empire State building, where we could rack up the bill, enjoy a good meal and some good laughs.If you could live in a book, TV show or movie, which would it be?Stranger Things. I’m not sure it would be very comfortable all the time, but it would be cool and it definitely keep me on my toes.What is your favorite thing to do around Cheyenne, WY?Dinner and a movie. One of my favorite restaurants is called Accomplice, which has great wings, ribs and barbecue.What was your childhood dream job?I wanted to play in the NFL or NBA. I'm fortunate enough now to have the opportunity to impact lives as a coach, instead of with my slick jumper or my touchdown dances.How did your father influence your career?The first thing he told me was, “If you want to be rich, don’t become a coach.” Being a coach was never something that I had planned. I played soccer in college, and blew my knee out. As I went through the rehabilitation process, I needed something competitive to do to keep me sane. At the time, my father was coaching college volleyball. He asked me if I’d come be his assistant, and I fell in love with the job. My father influenced me a lot indirectly as well. Growing up, he was very busy coaching high school football in the fall, volleyball in the winter and track and field during the spring. He was always doing something. Then he moved up to the college level and took over a struggling program. It was a long, slow process. It took five years before he finished a season with a winning record. Watching my father go through the daily grind of trying to make something out of nothing taught me to appreciate delayed gratification. It taught me that sometimes things don’t flip right around, and you have to stick to it and continue grinding to get through difficult situations. That was the biggest lesson I learned from him through observing him as a child to a parent.You were recently named in AVCA's Thirty Under 30 Award. What is the key to your success?I have been around the game for a long time, and I’ve had the pleasure of coaching under several different coaches that I learned a great deal from. My current assistant is extremely knowledgeable and brings great wisdom with her. I’ve learned a lot from her as well.I think growing up in the athletic circle, with my dad being a coach and athletic director, I’ve seen a lot of things and been able to observe a lot of coaches who coach different ways. I’ve seen things that work and things that don’t. I try to take samples from what I see.Here at LCCC, we’ve been fortunate enough to have success in recruiting athletes that fit our system and buy in to what we’re trying to do. I feel like my assistant and I can really relate to our players because we were both athletes in college. We’ve been through it and understand what our players are experiencing. They may not always like what we tell them, but they know deep down that it’s coming from a genuine place that is trying to put them in the best position to be successful.We try to keep good energy and excitement around our program. We go to battle with them every day and make sure that they’re being challenged. We try to keep them on the edge of their comfort zone, which makes every day fun and interesting. That helps keep the program alive and keeps everyone wondering what’s coming up next and eager to turn the corner for the next accomplishment.Your team was the runner-up for NJCAA Academic Team of the Year. How are you able to achieve success on the court while still focusing on academics?It starts with our recruiting efforts to make sure we’re getting players who are academically sound and take class serious because they have a goal of finishing with a degree. We also put together an academic success plan. Teamworks has really fed into that structure to keep them organized, and they know their whole day is planned out. We are in a position, as a staff, that if we control their time, we can control their environment. If we can control their environment, we can ensure their success. We’ve had some great leadership throughout our department and from our athletic director. Keeping that structure has really worked out well for us. We make sure that our players understand first and foremost when they come in that academics is their main priority and if they aren’t getting it done, they need to go somewhere else.What advice would you give to young aspiring coaches?You’ve got to be patient. You have to understand that you can’t make everybody happy, and not everyone is going to like you. That’s not your job. You have to set out your expectations, and then you really have to put your foot down, stick to them and hold people accountable. As soon as people know where your line is, they will make sure that they’re meeting the standards that you set forward. We tell our young club coaches to set the bar high, go after it, put your head down, grit your teeth and don’t stop working until you get there.