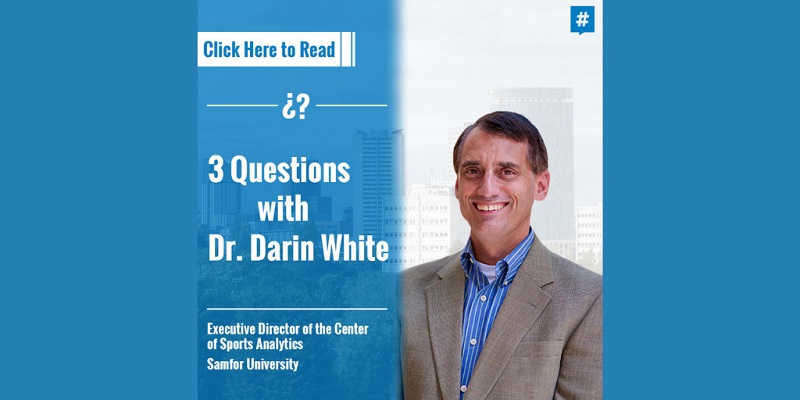 Dr. Darin White is executive director of the Center of Sports Analytics at Samford University. He recently answered 3 Questions with INFLCR:

1) Analytics have become such a big part of team preparation and scouting. From your perspective, what was the turning point that led to widespread acceptance?

Multiple events have been watershed moments. One was the Billy Beane ‘Moneyball’ with the Oakland A’s about 20 years ago. You may have read the book or seen the movie. That was the first phase of people getting excited about analytics.

Couple that with the data explosion that was have experienced in the past decade. They say if you took all the data that has ever been created in the history of the world, and put it into one big warehouse, 90 percent of that data would have been created in the past 24 months. That gives you a sense of the amount of data that is now being collected because of smartphones, social media and all the different devices. There is just so much more data out there now.

And then really the more recent event was last year when the Astros won the World Series. They took the Moneyball approach and just really went for it, hired a completely different kind of general manager (Jeff Luhnow) who is more of a data analytics guy than even a baseball guy. They put together a plan where they don’t make any decisions at all without data, from the business side all the way to the player side. They were criticized bigtime for it. In 2014, Sports Illustrated’s cover feature story was a picture of the Houston Astros and it said, ‘Your 2017 World Series Champion.’ This reporter from Sports Illustrated predicted they were going to win the World Series, based on this at-the-time crazy, over-the-top data analytics approach, and of course then they end of winning it; The 2017 version of Sports Illustrated was almost the exact same cover, only with your ACTUAL 2017 World Series Champion. That solidified once and for all that this really does work and is worth the investment.

2) What are some important ways analytics are being used for performance enhancement that the average fan might not see?

On the performance side, there is quite a bit going on in the area of nutrition, really trying to hone in on what is the optimal fuel system for individual athletes. Things like hydration, for example. Gatorade has been working on a project where a coach or trainer can track in real time the hydration level needed of a player in, for example, a soccer game — they’ve run x number of miles, this is the energy level they have put out, this is the hydration level they need, this is the humidity. They take all of this information into account to make sure you are staying at the optimal level. You are also seeing things with injury prevention, where you can almost predict where an injury will occur before it occurs.

A project we were involved in recently revolved around measuring muscle glycogen within the muscles of a player before the game and at halftime, so you could learn where that athlete is in terms of muscle glycogen.

There is a team in Italy that now has a device that they have — a little pill that they have the players swallow. It collects all sorts of information in real time during the match and is feeding that information back to the training staff. It goes on and on. It is remarkable the things that are being done.

On the business side, there are shoe companies that are collecting massive amounts of data on player movement patterns during games, using geotracking. They are able to identify the way that shoes need to be developed based on your movement style. With NBA players, they have found there are three primary movement styles, and depending on your style, it would dictate what type of shoe you should be wearing for maximum performance.

3) What are some ways programs are using analytics beyond the game to enhance the experience for the fans?

Analytics is impacting sports in three ways. You’ve got the medical side, the sports performance and metrics, and then you have the business side of sports. That is the area that is my focus in my research.

Anytime you are at a sporting event, you are going to see sponsors that are activating at that event.  Naming rights are about a $20 billion revenue stream for sports organizations in North America, but one of the things a sponsor is going to want to know is whether that sponsorship is actually working. Is it really having the effect we want it to have? We are discovering new ways to use big data from social media to measure and track that to find out whether that relationship is really working for the brand in a much more accurate way that we have ever been able to do before.

Speaking of social media data, we can learn a lot about our fans from social media and provide a much richer experience for the fan in terms of understanding who they are and how to engage them much more effectively 365 days a year using social media data.

INFLCR is a SaaS platform for sports team properties to store, track and deliver their content across their influencer network of athletes, coaches, former athletes, media, etc. Each influencer can access their personalized gallery of content on their INFLCR mobile app, which they can use to download and share specific content to their social media platforms, with all influencer user activity tracked back to an INFLCR dashboard for the sports team properties. In its first year, INFLCR has signed and renewed software subscription partnerships with more than 20 college, high school and professional sports team properties, including iconic college sports team brands like the University of Miami Football and the University of Kentucky Men’s Basketball. For more information or to request a demo, visit http://3.80.10.35/